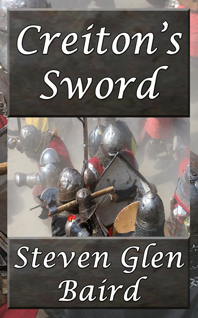 Creiton’s Swords were legends in their own lifetimes. The tales of Duke Creiton’s personal guard were known in every tavern and alehouse, but for Bryant they were just stories. He had no time for stories. It was all he could do to carve a place for himself among the guard of Bren while coming to terms with guilt for the family he’d left behind. But then the bells of Bren pealed out the warning of war, and there was only time for survival.

Bryant’s first taste of battle was nothing like the ballads. He saw no glory or honor in the butchery, and instead of riches there was only terror and ignoble death. But as he buried his closest friend, Bryant made a simple promise that would change his life. Never again would he stand idly by when he had the power to act. Never again would he hide behind the lie of helplessness. And when his first act on that promise led to saving a powerful nobleman’s life, Bryant found he’d started down a road with no way back. For Bryant had gained the attention of Creiton’s Swords, and no one who did that was ever the same again…