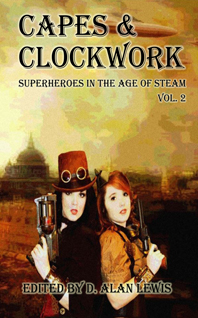 Superheroes in the Age of Steam
Return again to a forgotten time when steam and clockwork powered the world, and heroes rose to battle against the sinister forces that threatened the world. Some former heroes return to the fight, while new ones rise up in this fusion of fantasy, beauty, and adventure. Tease your imagination with twenty stories of good versus evil, monster versus hero, steam versus muscle.

The Tales:
Roger Dawkins and the Automaton Medusa by Adam Millard
Captain Amy and the Tower of Talon by D. Alan Lewis
Ecuadorian Adventure by Logan L. Masterson
Back Alley Battle Hymn by A. J. Johnson
County Fairy Tale by John G. Hartness
The Night Mississippi Declared War on the Moon by Brandon Black
Revenge of the Gorgons by John A. McColley
Wishing Well by Andrea Judy
Yellow Bird Mission by Christopher J. Valin
Breaking the Barrier by Herika R. Raymer
To Catch a Unicorn by M. D. Stewart
Destructible by Alexander S. Brown
JerryRigg – In Need of a Fix by Ray Dean
The Runaway City by Konstantine Paradias
Ten Thousand Several Doors by David J. Fielding
The Fluff and the Fury Five by Jeremy Hicks
The Lady Wore Black by Michael Krog
The Stowaway by M. B. Weston
Inertia by Robert J. Krog
Not So These City Beasts by Sean Taylor