Malice in Memphis: Elmwood Stories to Die For won best anthology or collection! 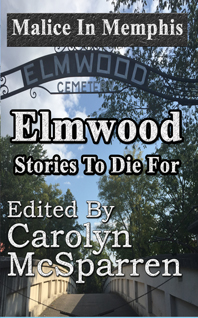 CONGRATULATIONS!!!
For the 2017 Darrell Award for Best Short Story, the winner is The Nature of Ghosts by Carolyn McSparren.
First Runner-Up is Drive-In Miss Daisy by Phyllis Appleby. (Both of these short stories appeared in Malice in Memphis: Ghost Stories).

The ghost stories and the characters in this book are pure fiction, even if the locations in which they were set are not. The tales, written by members of Malice in Memphis, showcase some of the Mid-South’s more interesting historical locations.

The geographical locations include the Mississippi River and the areas across from Memphis, as well as several of the villages and farms that survived the onslaught of Union soldiers. They’ve included graveyards and battlefields, some Memphis landmarks that survive and some that don’t. Memphis has been touched by wars, the Yellow Fever epidemics, the flu epidemic, floods, tornadoes, murders, and other hateful occurrences. Plenty of misery for the ghosts to feed upon. Many interesting locations to attach themselves to.

Whether you believe in the supernatural or not, we hope that you’ll enjoy these eerie stories of southern supernatural doings.

The Tales:
A Grave Situation by Elaine Meece
After Hours by Richard Warren Powell
Noblesse Oblige by Carolyn McSparren
Cadence by Seth Wood
A Dance with the Devil by Juanita Houston
Drive-In Miss Daisy by Phyllis Appleby
Fallen Soldier by Susan Wooten
Going Back Home by Barbara Christopher
An Indisputable Event by Steve Bradshaw
A Haunting in Midtown by Kristi Bradley
The Misadventures of Mama Lou: Victorian Mayhem by Angelyn Sherrod
The Adventures of Sonny Etherly: Special Powers by James C. Paavola
War is Hell by Geoffrey Meece
Kolopin by Seth Wood
The Nature of Ghosts by Carolyn McSparren

The Healer’s Choice:  In a land of subtle magics, a woman of peace must face the violence within her, and a man of war must learn that weapons will not give him the victory he desires.

Years ago, the Kel Nira gave up her name and all attachments to devote herself to her people. As Chief of the Healers’ Order, she has grounded her life in service, peace, and compassion. But now war has come to her country, and everything is changing.

When the invading army’s Lord Corvalen offers a treaty, it falls to the Kel Nira to decide whether her people will accept it or continue to fight. Yet even as she struggles to make the right choice, her own long-suppressed violent instincts are resurfacing, challenging everything she has believed about herself and her place in the world.

Nor is there peace for Corvalen, who finds himself falling in love with the Kel Nira and seduced by the subtle magics of the land she serves-the land he is sworn to conquer for his king.

Congratulations to When Dragons Sleep by Steven Glen Baird for being a finalist!!!

It gives us great pleasure to announce that the following outstanding authors were chosen by the 2016 Darrell Awards Jury as Finalists for the Best Published Midsouth Science Fiction, Fantasy, and/or Horror.

The Jury is also pleased to announce that AARON CHRISTOPHER DROWN is our newest winner of the Dal Coger Memorial Hall of Fame Award for his outstanding body of work, including many excellent short stories.

In addition, the Jury has chosen Brielle and the Alien Geek by JESSICA COULTER SMITH as the Winner of the 2016 Darrell Award for Best Midsouth SF/F/H Novella.

Congratulations to all of the Finalists!

The 2016 Darrell Awards will be presented during the Banquet at MidSouthCon 34 on Saturday, March 19. Please see the convention’s website at www.midsouthcon.org for details of that event. 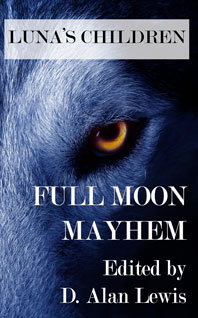 For countless centuries, mankind has watched as the sun goes down knowing that Luna will rise in its place, to rain her brilliant shards of light upon the Earth. But for the cursed and afflicted, that silvery orb brings horror and death.

Luna’s Children: Full Moon Mayhem is a collection of 22 stories of the werewolf. From the halls of a local high school to the bowels of a Civil War-era church, from the desserts of the American Southwest to the distant lands across the seas, from the horrors of the first kill to a lycanthropy support group, Full Moon Mayhem explores the many stories and possibilities of werewolves in the modern world.

The Tales:
A Balance, Beastly and Bloody by Tommy Hancock
Painted Wolves by Nerine Dorman
Truth or Darren by Angela Bodine
The Beast by Chuck Miller
Cry Wolf by by M.R. Williamson
Eat Your Peas by Robert J. Krog ***
Sheep in Wolves Clothing by Luke Woodward
Into the Woods by Carson Buckingham
To Err is Human by Rachel Anne Blackmon
Bayou Loup by Kalila Smith
The Study Break by Miracle Austin
The Sponsor by J.M. Perkins
Newborn by Mike Rhodes
The Last Lamb by Alexander S. Brown
Gooji by Amy L. Herring
Night Run by Rachel A. Brune
Moonburn by Stephen McQuiggan
Fierce by Rob Cerio
The Children of Gennhara by Herika R. Raymer
Valeria’s Choice by Susan Burdorf
Hound of God by James S. Hoch
Beta Male, Alpha Wolf by Jeremy Hicks 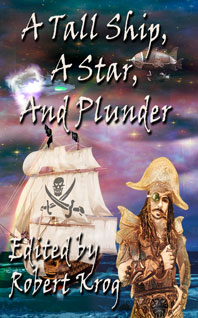 Congratulations to Robert J. Krog for his nomination as a Darrell Award Finalist – Short Story for The Serpent and the Dagger featured in A Tall Ship, a Star, and Plunder
https://darrellawards.wordpress.com/2015/02/23/2015-darrell-finalists/

Piracy has been around as long as there have been ships plying the seas with anything that might be valuable enough to take by force. Piracy will still be around when merchant vessels are traveling the galaxy with cargoes of potential plunder. Explore the past, present, and future of our favorite scallywags in these 24 amazing tales of bravado, daring, and dastardly deeds committed by the legendary pirates.

Good luck, and may the wind be in your favor, blowing you toward good pickings, and a safe harbor.

The Tales:
Yo Ho by Melinda LaFevers
Rumble the Dragon by Cindy Vallar
The Princess and the Sea by Sydney Blackburn
Ghost of a Chance by Paula Gail Benson
The Making of a Privateer by Melinda LaFevers
Not I by Jerri Hardesty
Fireflies on the Water by Michael Krog
The Celeste Affair by D. Alan Lewis
The Tale of Tizur the Red by Tom Sheehan
Bottom of the Mug by S. P. Dorning
The Captain’s Woman, the Dagger, and the Serpent by Robert Krog
The Gods Must Clearly Smile by A. Christopher Drown
Corey of Steel by Jerri Hardesty
The Jamaican Dragon by D. G. Driver
Rosa and the Pirate by Laura Nelson
The Ghost of Queen Anne’s Revenge by M. R. Williamson
Of Wing and Song by Kirk Hardesty
One Way by Herika R. Raymer
Puffystuff the Pirate by Jerri Hardesty
Theft of the Royal Jewels by Kathryn Sullivan
Eighty-Six Pitrell Becomes Dread Admiral by Paul Calhoun
Rasputin’s Whimsey by T.A. Riddell
Pirates of Happenstance by HC Playa
Blood is Thicker than Pirate’s Gold by Kent Swarts