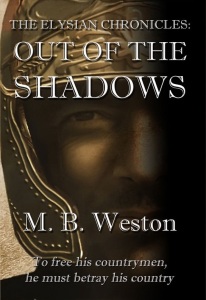 Dark Oak Press author, M. B. Weston, gave us an interview about not only her current fantasy series, The Elysian Chronicles, but also on her writing style and other things she has going on.

What genres do you enjoy writing? I started out with fantasy, but I’m also enjoying writing paranormal, suspense, urban fantasy, Steampunk, and I’m working on some pulp now. I also see a bit of mystery writing in my future.

Tell us about your latest book: My latest book is Out of the Shadows, the second book in the Elysian Chronicles series. The Elysian Chronicles is military fantasy about guardian angel warfare and treason with a lot of action. In the first book, A Prophecy Forgotten, my hero Davian must keep a young boy prophesied to save the world safe while at the same time stop a conspiracy of his fellow soldiers from taking over his home government. In Out of the Shadows, the scoundrels have successfully taken over, and Davian must do everything he can to bring them down, despite the fact he only has a few soldiers at his disposal.

What inspired the story? Where did you get that first bit of “ah ha” inspiration? Out of the Shadows is a sequel to A Prophecy Forgotten, and I have to admit that it was quite easy to come up with the idea for it since I knew what would happen once I started developing APF. It all began when I was imagining a scene with little boy drowning in a river. A young woman rescued him, but she ended up hitting her head on a rock and getting amnesia. When she woke, I thought, “Wouldn’t it be funny if this boy thought she was actually his guardian angel?” Then I thought, “What if she was?” At that moment, the entire story changed into epic fantasy, and the angels–cherubians, I call them–became the central culture instead of the humans.

Give us an insight into your main character. What does he/she do that is so special? Davian is a special operative in the guardian angel military who excels at leading black ops against the angel’s greatest enemies–mornachts. (If I’ve got angels, I’ve go to have some demons, right?) He’s a hard core soldier with a tremendous amount of focus on his mission–often at the expense of other aspects of his social life. I think my favorite thing about him is that he would really just rather live in peace in the country with a vegetable garden. In Out of the Shadows, Davian is imprisoned for 10 years and then finds himself with a chance at a new life when he escapes. Unfortunately, his loyalty to his country overcomes his desire for peace. He decides–with prodding–to free his country from the new dictator who rules it.

How much research did you have to do for this book? Any travel involved? I did a lot of research on Delta Force, Green Berets, and Navy Seals to come up with the culture for my special ops team. I tried to blend the idea of navy-seals meets Roman soldiers with wings. The earth sections of Out of the Shadows take place at the United States Naval Academy. I was fortunate enough to be able to travel there for a weekend, and it really influenced my writing.

What was the hardest thing about writing your latest book? Trying to coordinate the battle going on in Heaven’s Realm (the name I have for the dimension the guardian angels live in) and the battle on earth. I had to make sure the timing fit into the appropriate parts of the Naval Academy’s academic schedule. (I used their 2006 calendar.) I also ended up dealing with two sets of characters on both earth and in Heaven’s Realm, and that meant I had to track each one’s development and make sure each was given his or her fair amount of time.

Which writers inspire you? Tolkein, C. S. Lewis, J. K. Rowling, and in this one I used a lot of Tom Clancy.

What does your writing process look like? Are you a plotter or a pantser? I’m a modified pantser, meaning I write by the seat of my pants–mostly. I start out with a story idea. I do a bit of brain work to give myself a big picture concept of where I want the story to end up. Then I just start writing it. I’ve tried an outline, but using an outline takes me double the time because the story always changes once I get into the scene and into the characters. To keep from writing too much that might be deleted during the editing process, I write in layers. My first draft is really more of a rushed, bare-boned pre-draft with dialog and stage directions. I go back in and fill in the details, which means that if I delete a scene or change things around, I’m messing with something that only took me five minutes to jot down instead of a highly edited bit of writing that took a day.

What are you working on at the minute? In order of timing:

Why do you write? Because I have to. I know, silly answer, but it’s true. I have stories in my head, and I need to get them out.

Where do your ideas come from? Everywhere. Anything can spark an idea. That’s why its so important for writers to pay attention to everything.

What is the hardest thing about writing? Making sure the plot feels organic instead of contrived. The plot needs to feel seamless and real, and as odd as it seems it takes a lot of behind-the-scenes organizational work to make the story feel like it’s just unfolding effortlessly in front of you.

What advice would you give to aspiring writers? Well, most of the advice we all hear all the time is pretty relevant: don’t give up, keep writing, etc. I guess to be different, I would say to learn how to really edit. Learn the craft of writing. Don’t just think that because you’ve got a great story you can rush through and be done. Learn about style and grammar. Make your manuscript sparkle before you turn it in to a publisher. There is no such thing as good writers, just good editors. The ones who make it to the top are the ones who edit their own work the best. 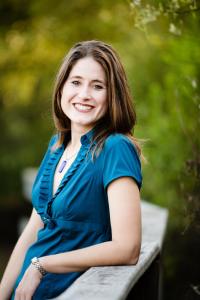 Find out more about M. B. Weston at these sites: